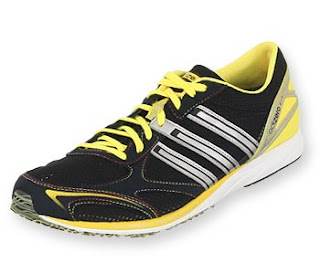 Alright so I'm a bit addicted to the AdiZero line. But that's only because it's a kickass set of shoes. I've actually had this one almost as long as I've been using the RC's (R.I.P.) but I never got around to posting about them.

They fit pretty well between the RCs and the PRs. They're light at 6.2 oz but definitely more sturdy than the PRs. The bottom uses the hard tack stuff that feels basically like plastic and sticks to carpet kind of like velcro when you walk around (sorry for the bad description, but if you've had flats that use the stuff you know what I mean - check out the picture). It's a pretty good lightweight tread but it does wear down quickly. The heel to toe raise is pretty low which I like, and they're nice and flexible like a real shoe should be. I think they feel a lot harder than the RCs though, and they aren't much lighter.
I've been using them to race road races where PRs are too flimsy or would pick up pebbles like it's their job and the Pro's are good for that. On that note - the 2009 Pro's have an AMAZING improvement over the '08s (yes I had both). The old ones had a slot in the bottom that picked up rocks just the RCs & PRs, but in '09 they covered it with a lightweight metal screen. The thing gets beat up but viola - no more hitch hiking pebbles. Personally this is a big plus for me, and I love it when a shoe company actually adds a useful improvement to a shoe instead of some new buzzword. 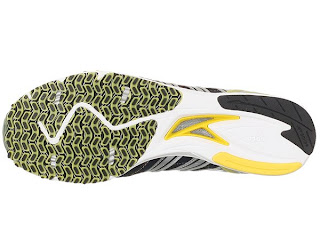 I don't use them as a day to day trainer though since the primary tread wears out fast, and they just don't feel as comfy for the long runs.
Pros: Light, comfy, good racing shoe. Built in sole screen to keep pebbles out.
Cons: Hard & fast wearing tread, not much cushion (compared to other flats that is, not compared to those overbuilt running boots most people call trainers).
Labels: adidas flats gear reviews shoes

grue8vkt29 said…
The state may even construct a number of} casinos, which are anticipated to supply in-person betting. Since the Supreme Court struck down the Professional and Amateur Sports Protection Act , the federal law prohibiting sports activities gambling, in 2018, 30 states and Washington DC now offer some 토토사이트 type of sports activities wagering. Of these, 21 states and DC offer each in-person and online gambling; two states offer only online wagering; and in eight states, bets can only be positioned in individual, typically at a casino or racetrack.
February 4, 2023 at 10:51 PM