"Are you into those toe shoe things?" I get this question all the time (they're asking about VFFs: Vibram Five Fingers) and I take a deep breath before responding because it's usually the beginning of a long conversation.

In reality, there's a spectrum in running philosophies that has two ends:
While I don't train in VFFs, the last 8 years have landed me closer to the 2nd end of the spectrum. I grew up running in standard high cushion trainers like everyone else from middle school to early college, and majority of my most competitive friends (including those qualifying for the Olympic trials) still tend to train in more traditional trainers. However 8 years ago (mid college racing & suffering shin splints) I started reading more about minimalist philosophies and have been running in some form of racing flat or minimalist shoe ever since. I consider myself a little too 'serious' of a runner to train/race in VFFs (be honest - you don't see these things in the Olympics) but I do own some, and I do think aspects of them have merits and may work great for some runners. When figuring out where you lie on the spectrum (or where a shoe lies) there are 5 major components that separate the two ends:
Note: Scientific studies do exist that back up the minimalist side of all these arguments, I just don't have them handy at the moment. I intend to make this post a work in progress and add citations but if you have any articles/papers you think are interesting include them in the comments, I'd love to see them.

1. Heel/toe height difference
This is one of the most impactful (and difficult to adjust to) differences between traditional and minimalist trainers. 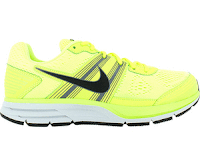 2. Padding/cushioning
"Why is the ground so hard?" is a typical first comment when trying on minimalist shoes, and it will probably be the first thing your feet notice.

3. Support
This is something minimalist converts need to be very cautious about.

4. Foot & toe freedom/flexibility
While the first two aspects probably make a bigger difference in your running mechanics  the visible toe freedom is what has made VFFs so well known to runners & onlookers.

5. Weight
I almost didn't include this as an aspect, because it's really a function of the above 4 design choices. However I mention it in all my reviews and I do consider it when buying shoes so I thought it should stand on it's own. Since barefoot is obviously the lightest shoe possible, minimalist runners love light shoes. I love the feel of light shoes but I also enjoy the mental aspect of knowing I'm not weighing my feet down with anything extra. Overall weight tends to be driven down by less cushioning, lower heels, and less support so if you pay attention to the first categories you'll naturally end up with a lighter shoe. It is fun to pay attention to though and the weight of my shoes always shocks my friends.