I've been on the 'minimalist' train for about 6 years now but I've always stuck to lightweight racing flats (disclaimer: I do own a pair of Vibram 5 fingers but mainly use them for water sports - I've only ran in them a few times). In general, I think racing flats offer low heels, light weight, and high flexibility, and don't get you laughed off the track while a lot of the minimalist trend shoes (Nike Frees, Newtons, etc) have been over priced and lacking key features (ex: flexible but too much cushion). Lately though some new entries have convinced me to at least give them a try, namely the Minimus line from New Balance, and the Merrell Trail Glove (thoughts coming soon). Both have low heels, lots of flexibility, and nice Vibram soles but fit completely differently - which makes for an interesting comparison. For now I'll review the Minimus since I have a little more experience with it but I'm putting in some miles with the Trail Glove as well. 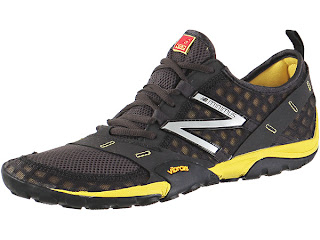 There are a few shoes in the Minimus line (Trail, Road, & Cross Train) but I quickly jumped to the trail shoe even though I do a lot of running on the roads. The road shoe looks too cushy (I believe in the theory that the feet will do the cushioning if you don't blindfold them with padding) and the cross training shoe just doesn't look designed for running. That being said, the trail shoe has some nice things going for it - 4mm of difference between heel and toe which is pretty close to my best flats, 7.1oz weight (my flats are ~4oz but the soles on these are much much tougher), and they're nice and flexible without too much 'support' feeling like it's pushing into my arches.


Fit: The Minimus line is made to fit barefoot which I was excited about. There are some nice features here - there's a bit of special padding in the heel that keeps it from rubbing, there's an elastic sock like tongue that grips the foot, and overall it just feels like the shoes is flexible but snug on the foot. Compared to my Mizuno's or Merrell's this seems to be an equally effective, but very different feel. I'm used to shoes with a big toe box that let my toes wiggle freely inside the shoe, but this is a more 5-finger like approach where the shoe is tight on the toes, but wiggles & bends with the foot. I was worried the increased contact points with my skin would cause more blisters or agitation on a run, but so far (a few runs in) this hasn't yet been a problem. Apparently they fit well enough and flex freely enough that they don't cause extra agitation. 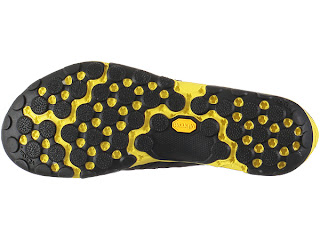 Looking at the sole of the shoe in pictures I was worried that these would be pebble picking magnets - that annoying syndrome where small rocks get stuck in the soles or arches of a shoe and you either have to run sounding like a horse, or stop to pick them out with a wood chip. Thankfully the design is better than it looks - those yellow indents are tapered in a way that doesn't actually seem to pick up too many rocks. I'll check back in after 100 miles or so and see if I still have the same opinion.


Overall this isn't going to unseat my Mizuno's as my go-to trainer/racer but I really like it as a trail shoe and all around durable trainer. The hardest decision is going to be whether I ultimately prefer the sock like fit of the Minimus or the spacious fit & low heel of the Merrells. I can say this is the best looking minimalist shoe (no dorky toe box, toe separation, or generally wacky look) and that is helping to make it my favorite shoe so far for a hike or cross training as well.